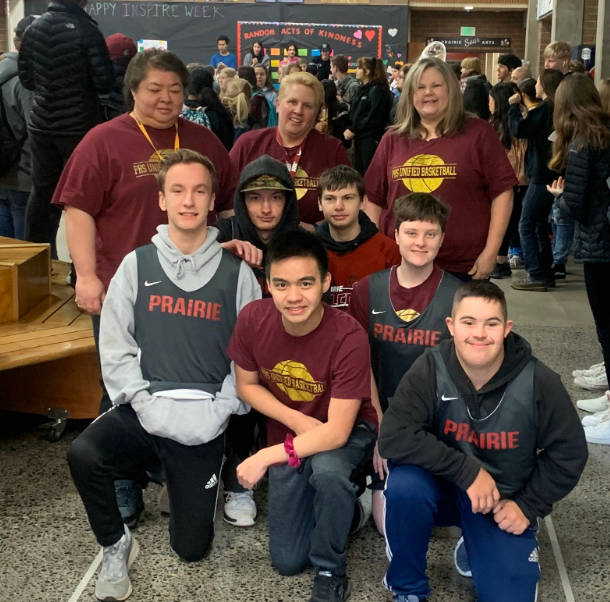 Last weekend, the Prairie Unified Basketball Team traveled to compete against the top teams in the state. Throughout the season, the Falcons have remained undefeated, beating out every local team. The Falcons overall record throughout the entire year was 8-2, remaining undefeated until state.

The Falcons left on Friday, driving up to Wenatchee, Washington, and arriving the night before the games. The students played early the following Saturday, playing three games in the tournament. The Falcons first game of the day was a loss, knocking the team down into the consolation bracket. After their loss, the Falcons then won their second game, putting them in the third and fourth placement game. The final score of the Falcons last game of the season was 33-37, resulting in a fourth place finish for the Falcons.

Senior, Ethan Jensen, shared his thoughts on why the team lost.

“Our endurance and work ethic was not the best in these games,” said Jensen. “But we still gave our best effort.”

Senior, Logan Robertson, has played on the team for one year and shares how he thinks the team did at state.

“I think we did really good this year,” said Robertson. “It was the first time we went to state for basketball.”

Robertson decided to play for the unified team this year along with teammate, Ethan Jensen.

“I’m glad I decided to play,” said Jensen. “It was very fun to play on the team with everyone.”

This is the first season the Unified Falcons basketball team has been to state.

Along with playing basketball at the State Tournament, the team went out to dinner together after their games on Saturday.

“We still had a good time, even if we did not have the outcome we wanted,”  said Robertson.

The spring sport for the Unified Team is soccer. The Unified Soccer Team has made it to state for  the past few years. Some of the basketball players will also be joining the team for the spring season.

“Now we get to get ready for soccer which I know will be fun,” said Senior, Michael Windom.

As the winter sports season comes to the end, spring sports begin their practices and set sail for their coming season.